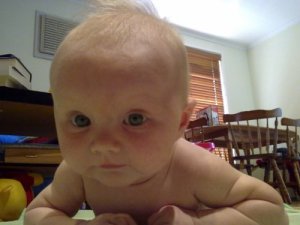 Evelyn is three months old today and she has just rolled over for the first time!

I put her on her tummy, went into the kitchen, and when I returned she was on her back!

I put her back on her tummy and filmed her for a while to see if she’d do it again… she came close, but no luck this time!

Life is a series of changes, nothing ever remains the same for long – just look at Facebook. But some periods seem more turbulent than others, some times present more choices and options, decisions to make, changes to catalyse yourself. For me, this is such a time. 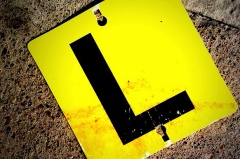 I have finally taken steps towards learning to drive properly. Over the years I have held various learner permits, and driven various vehicles, but I was more proficient on my scooter than anything else. However a scooter is obviously impractical now that I have children, and it is past time I figured out this car-driving thing. I haven’t driven a car in many years, and my permit has long-since expired, so on Thursday I will be re-sitting the test to get a new permit. The following week I will hopefully be having several professional lessons and getting some practice in with my parents. It won’t be too long, I hope, before I get my P plates and can drive alone!

The other big change possibly looming is a renewal of my interest in archaeology. It is a field I have often thought of briefly, but never saw as a viable study/career option – mostly because it seems so pretentious, so ridiculous, to say out loud: “I want to be an archaeologist!” However now I think, “Why the heck not?” I can at least give it a shot, right?

So I’ve enrolled with Open University Australia again to do a single unit on the subject, specifically focussed on Israel – because that is what they’ve got available, that is not a specific interest of my own. That starts at the end of this month. I suppose after I finish the unit, I will re-evaluate my interests and capabilities, and that will be the basis of a later decision on whether to pursue archaeology as a degree and career.

La Trobe University offer a Bachelor of Archaeology, and also offer “short courses” (single units) from the bachelor. The only issue I see with that is the need for childcare; both the bachelor and the short courses require attendance on campus and can’t be done online. Evelyn is only seven weeks old now; even if I enrolled in the bachelor from semester two next year she would still be less than a year old. It’s a little sooner than I had wanted to put her into full-time childcare; I’d hoped to be home with my kids for as long as possible. On the other hand, if I waited an extra year, would my enthusiasm have waned during the down-time? It’s something to think about. Perhaps a couple of short courses or online units will keep my interest up and give me the chance of RPL (recognition of prior learning) later on, whilst also allowing me to stay home with the kids just a little bit longer.

My usual advice to friends pondering whether or not to do something is simple: Do it! The reason behind this is, you usually risk little or nothing by trying something. But if you never even try, you’ll never know what might have happened. The only hard part is taking my own advice!

If anybody had told me three years ago that I would one day spend a considerable portion of my time being a leopard and carrying on inane conversations with a toddler being a lion… I’d have wondered what drugs they were about to give me.

However, it turns out that one of Elspeth’s favourite passtimes is making me voice one character while she voices another – ‘Mummy talk leopard?’ she says, thrusting said leopard upon me while she clutches the lion.

The conversations are as in depth as a lesson in another language, with all the usual standards: Hello, how are you, what are you doing? Occasionally the answers are surprising; the lion was apparently on a jumping castle this afternoon. They then descend into incomprehensible babble and mumbles, just like language lessons.

I try to expand her vocabulary and her general knowledge through these conversations, but her response to these forays into unknown territory is lukewarm at best. Upon being confronted with something new, a frequent response from Elspeth is to go back to ‘Hello!’ and start again.

And this is, honestly, how I spend quite a lot of my time at home with her. Is it any wonder I sometimes feel I’m going crazy?!