Evelyn is getting more of a grasp on language now, and says many understandable things. She’s really good at ‘bubble’ and ‘bread’, and ‘wa-wer’ consistently means ‘shower’. We get ‘more, more,’ whenever she wants, well, more of something. She makes a sort of ‘jooossss’ noise which clearly means ‘juice’. She makes, upon request, the correct noises for a variety of animals, including dog, cat, elephant, snake, monkey, sheep, and cow. She says ‘eye’ while poking me in it. There are plenty more, but those are her best and clearest sounds. She’s becoming quite the chatterbox!

I took the girls to the playground across the road this morning. Well, it’s across the road, we go there a bit. As recently as yesterday, Evelyn hesitated to climb the steps. But this morning she was racing up them, running across the wobbly bridge, and half-falling down the slide with reckless abandon! As I recall, Elspeth was about three months older than this when she started doing that circuit, so I guess Evelyn has benefitted from having an older sibling to watch and learn from!

Today, Evelyn decided she could walk. For a little while now she’s been cruising around using the furniture and walls for support, and for a couple of days she has been taking several unsupported steps.

But today she has been tottering around the house astonishingly well, unhesitatingly leaving the security of a chair to wander the wide wasteland of the living room. She went from the dining table to the study this morning, a straightforward jaunt in a single direction of about seven metres. Later, she took an epic journey, almost completing a circuit of the house, which may not be much further in distance, but involves more turning and thus more effort.

She now seems to see walking as a form of transport equally as useful as crawling, or even more so. Although I must say even her crawling is amazing; she gets up a fair turn of speed, and her bum wiggles madly as she goes. She’s also started getting around on her knees, which I’m not sure whether to call ‘walking on her knees’ or ‘crawling upright’.

Here is a short video of Evelyn walking. It’s not her best effort, but she keeps falling over on camera, then putting in the real miles when the camera isn’t handy.

I’ve gotten used to knowing that my other fully mobile child, Elspeth, also knows how to do things like not fall down steps. But I’d forgotten that babies learn mobility long before acquiring a modicum of common sense. I will have to watch Evelyn very closely now that she’s so free-range, to be sure she doesn’t hurt herself or go missing!

Evelyn is nearly eleven months old now. I can’t believe it, that’s nearly a year! So here’s an update of how she is growing. 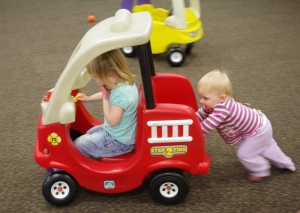 She is a champion speed-crawler, I am always amazed at how fast she goes. She’s also cruising around very effectively on her feet, using furniture and walls and people and whatever else she can reach. She’s got a walker – an upright toy with wheels and a handle – and she races around the house behind that. She’s pictured here pushing Elspeth around.

Evelyn is also beginning to sleep really well. I’ve got her down to one nap during the day, and that has helped her sleep through the night. We haven’t had a ridiculous o’clock wake up for about a week now, so I’m confident in saying that’s it.

She is still eating wonderfully. She eats anything, everything – except egg. She only has two teeth, but it’s amazing what she can do with them! She was managing big chunks of coconut last night.

She is also becoming really communicative; even though her vocalisations are still mostly ‘ba’ and ‘ga’ and ‘da’ and so on, she can make it very clear when she wants something. For instance, she points at food she wants. She headbutts me in the mouth when she wants a kiss. She screams when she wants attention – but stops and entertains herself if I ignore her!

She and Elspeth are getting much better at playing together. I hear more laughs than screams now as they frolic. I still think Elspeth is too rough with her, but as long as Evelyn is laughing, I figure she doesn’t mind.

All in all, I’m pleased with how she’s going. I think she’s going to be another smart cookie, like her big sister, so I’m in for a hell of a time when she starts talking!

This rather puzzled looking munchkin, at just past eight months old, has learnt to pull herself to a standing position! She was figuring it out yesterday, and today she is perfecting the technique. I’m sure it won’t be long before she’s cruising around on the furniture, and then walking all by herself! Just watch my hair turn grey now…

A few weeks ago I finally decided it was time to properly potty train Elspeth. So I said to her, ‘No more nappies during the day, it’s underpants or nothing from now on.’ She threw a tantrum, but I’m bigger than her so I won. And we’ve had remarkably few accidents! She rarely needs reminding or prompting, she goes on the potty by herself, and often asks to use the toilet too. So that’s good!

In the last week or so, Evelyn has figured out crawling! She’s getting around like a champion now, and follows me around the house all the time. She is also starting to babble, making quite a few nice consonant sounds – ‘ba’ and ‘da’ and ‘ga’. She’s done the occasional ‘da-dee’, which Aidan is happy to claim as her first word. There are also some ‘hiyas’ and ‘yeahs’.

I’ve been studying hard and I’ve just about finished my most recent unit – Worlds of Early Modern Europe. Next week I start on the Fall of the Roman Republic.

I’m going to try not to be overly graphic, but I feel this is something that needs to be recorded and commemorated.

Previous efforts at potty training Elspeth have been half-hearted at best, and led by her rather than encouraged by us. I’m not really sure why that is; possibly a combination of uncertainty, unwillingness to pressure her, and – honestly – a bit of laziness.

But today I am flat out refusing to put a nappy on her. It’s underpants or nothing, mostly nothing so far.

The first three wees were on the floor. Each time I got her to help me clean up, then reminded her to sit on the potty next time she wanted to do a wee. The next two were on the potty. I didn’t need to prompt her, remind her, or ask her if she needed to. She called out, ‘I’m doing a wee!’ and I looked up from something else to see her sitting on the potty of her own volition. The second time was the same.

I’m really proud and happy, I’m hoping this is a definitive turning point. I’d love to have one kid out of nappies, not least for the sake of our poor overflowing bin!