I am clearly very good at blogging random musings, but less good at recording important events! On Sunday, my daughter Elspeth turned three. Three whole years! I think what I find the most fascinating about the passage of time is that in some ways those three years have whizzed by and her birth seems like yesterday; but in other ways, it feels like I’ve always had her, she’s been here forever, I barely remember life any other way!

Oh Elspeth, one day you’ll grow up, and you might read this. You won’t remember the day, but I’ve got plenty of photos. Just ask. You had Winnie the Pooh on your cake. A big chocolate cake, gluten free for the sake of your poppy and I. It was delicious! We went to Child’s Play with some of your small friends and some of my big ones. It was a lovely day, and everybody was happily exhausted at the end of it.

Elspeth, for three years I’ve had you in my life. You’ve amazed me, delighted me, melted me, and made me furious! You’re an incredibly smart child, maybe too smart for your own good! I have a feeling it won’t be long before you are officially categorised as ‘gifted’, whatever that really means. Life is certainly going to be interesting, especially now that you’ve got a baby sister – Evelyn turns one in just a few months. You two keep me on my toes.

But as much as I complain sometimes – about the tantrums, and the lack of sleep, and your wilful nature which clashes with my own – I love you wholeheartedly, and having you is one of the best things I ever did.

Hoping the next year is as much fun!

Being the beginning of a new year, I thought it appropriate to do a post about my children and their current states of development. This is something I hope they will look back on in years to come!

Elspeth, two and a half years old 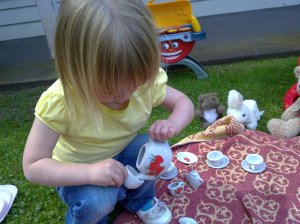 Elspeth has always been an imaginative child, and her creativity only seems to be growing over time!

We have just returned from a short holiday with Aidan’s parents, where his mother played imaginative games with Elspeth almost non-stop. They had tea parties and picnics, they visited friends, they played in the Hundred Acre Wood with Winnie the Pooh, and went shopping – all without leaving the front yard, and with minimal props!

At home she is much the same. Aidan has often been the shopkeeper of late, charging the poor innocent child hundreds of imaginary dollars for a single imaginary pea!

She doesn’t always need us or any adult for her play. She’s often quite happy to pretend to be several people or characters, and speak for all of them. Even as I type, she’s just offered herself some imaginary water, accepted gratefully, sipped it, and thanked herself.

It is extraordinary to watch. I hope her imagination continues to grow and be actively used for her entire life. If she’s anything like me, she will find her inner worlds far more appealing than reality, and a good antidote to it!

Yesterday Aidan and I took Elspeth to the cinema for the very first time! The new Winnie the Pooh movie is out, and given her obsession we thought she might like it.

It was fantastic. The creators have done very well in keeping the feel and spirit of the old Winnie the Pooh, with a brand new story. Even the animation style and quality looks oldschool, in the best possible way. I’m not sure who ended up loving it more: Elspeth or her parents!

It’s not a long movie, only just over an hour, so even at two years old she had no problem sitting still and watching the whole thing quietly. Except for her contortions to reach the popcorn! 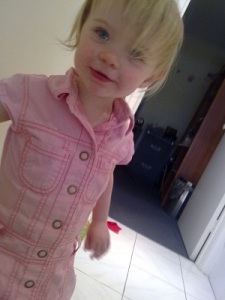 You turn two very soon, so it seemed a good time to make note of where we’re at and what you’re up to, because I know that when you ask later in life my memory will be woefully vague.

The most notable thing about you right now is your obsession with Winnie the Pooh. I’m talking books, DVDs, toys, your toothbrush, the works. I think every book I have read to you in the last few months has been about Pooh, with perhaps one or two exceptions!

Next is your love of ‘nuggle on the bed’, which is your way of asking (nay, demanding) that Aidan or myself go and sit on the bed with you to play or read. Nuggles do not actually involve any snuggles. And, might I add, you get very stroppy when denied or put off!

You also enjoy holding tea parties at the moment. Your nanny Lynne (Aidan’s mum) recently gave you a very lovely plastic tea set, and you ‘pour pour pour’ imaginary tea from the pot into the cups for your ‘friends’ (your current favourite stuffed toys, such as Iggle Piggle or that cow with the huge head).

Something you insist on is being close to me. You play well on your own, needing little active input from me, but you do like me to be right there – probably so that your frequent exclamations of ‘Look at that!’ won’t be missed.

You have a very good imagination, making your toys hold conversations and playing role playing games like riding the bus or going shopping. A toy doesn’t even need to be humanoid for you to give it a voice; even your pencils talk to me!

Your speech and vocabulary are coming along very nicely; I like to think you’re quite advanced for your age! But you still can’t say the letter L; it is usually expressed as a Y or W.

You are still in nappies for now, although I’m hoping to get you potty trained quite soon. You do sleep in a bed instead of a cot, though – that is one smalk step towards being a ‘big girl’.

The music that you love is eclectic. The songs I sing to soothe you tend to be what I call ‘black’ songs: gospel style, African-inspired, even some reggae. But the songs you ask for when awake are the theme song from Winnie the Pooh, and some weird duck song on youtube.

You love electronic devices. You’re quite good on the iPad when I let you, and you often demand it even though I try to limit your screen time. Sometimes, me singing a song isn’t good enough for you, and you demand that I play it on the ‘puter’ instead. You play with my phone too, and more than once you’ve made accidental phone calls – including a couple to India!

You are just beginning to throw monster tantrums. My strategy for now is to completely ignore it. I don’t care; if I said no to something, I meant it! Yelling for a while won’t hurt you, but it won’t change my mind either!

I think that is about it for now. I hope you laugh when you read this! It is odd to think you will have no recollection of any of these things, you will just have to trust me! 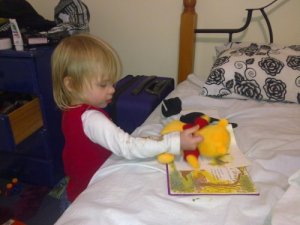 Elspeth has a serious obsession with Winnie the Pooh.

The only toys she wants to play with, the only TV shows that will hold her attention, the only books she’s interested in – all Winnie the Pooh!

I don’t know how many times recently I’ve seen Pooh’s Grand Adventure – which happens to be the only one of our three Pooh-related DVDs I can find right now. If this goes on, I really must find the others!